How to stop acting as if more is better

Quality matters, we often say, but when we’re not paying attention, quantity tends to sneak in and get the upper hand

Imagine that £2 buys you one of two options: either a nice big scoop of your favourite flavour ice cream, or just a spoonful of gelato made by Alessandro Crispini, the winner of ‘best gelato in the world’ award in 2017.  Would it be a hard choice? What if you could get more of Mr Crispini’s frozen delight – half a scoop perhaps?

This hypothetical situation (unless you are in Spoleto, where the Crispini gelateria is located) exemplifies a fundamental dilemma we often face: how do we trade off quantity with quality? Maybe you don’t particularly like ice cream. A holiday perhaps? A week on a paradise island, or a whole month at the Belgian seaside? A weekend break in Prague or New York, or a fortnight in a caravan in Yorkshire?

Quantities are of course easier to evaluate than quality. When we cannot assess the quality of something (or when we don’t know how to do it), we often – understandably and reasonably – fall back to evaluating what we can: some quantitative measure.

Behavioural economist Dan Ariely tells a story of a locksmith to illustrate how that affects our perception of value (if we are not careful). As an apprentice, when he was called to help out people who had locked themselves out, he used to take a long time to open the lock (often breaking it in the process), as he often didn’t quite know what he was doing. Yet his customers never complained, not even if they were charged for a replacement (and they often gave him a fat tip). Many years of experience later, it took him at most a minute to pick a lock, rarely ever breaking it… yet customers often complained about the size of his bill. Our perception, Ariely says, is often not about what we’re getting (the output, the quality), but about how much effort or time someone is putting in on our behalf (the quantity). 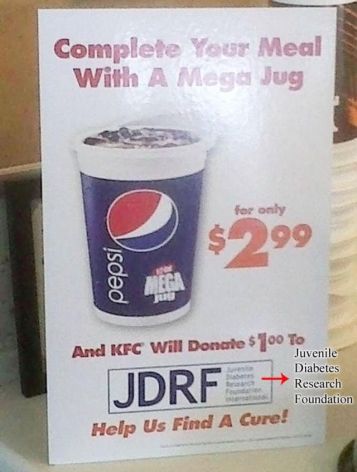 This tendency to be guided by the magnitude of the input we are getting can be to our detriment, though. When McDonald’s started out in 1955, there was one size of Coke on the menu: 7 ounces (just over 200ml). By 1994, the largest (of several sizes) was six times larger. Not that this was the end, though. KFC’s MegaJug (64 oz. or nearly 2 litres) was an 800-kcal monster containing the equivalent of 56 spoonsful of sugar.

These excesses have disappeared, but that doesn’t mean we are safe from quantity bias. In a UK McDonald’s you can buy an “extra value” meal, including medium drink and fries for about £4.50-£5 (€5-5.50, $5.80-6.50) depending on the burger. But for just 40p (not even 10% extra) you can upgrade it from medium to large. Very tempting indeed. (Even if your inner economist looks at just the cost it is good value: you get about 1/3 more fries and ¼ more soda which, if you bought them individually, would cost you 20p more than the upgrade).

But are we actually better off with more food and drink?

If we are to believe Yann Cornil, an economist and assistant professor of Marketing at the University of British Columbia, and Pierre Chandon, a professor of Marketing at INSEAD, the answer is no. They claim there is a win-win-win to be had if only we were to eat differently. By focusing on quality (the sensory enjoyment we get from eating) rather than on the quantity we ingest, we will not only derive more pleasure at mealtimes, but we will also keep a lid on the calories. And the third win? If it’s all so gratifying we should be prepared to pay more for the experience, so suppliers of food – from restaurants to pudding makers – will see bigger profits.

Epicurus to the rescue

They put this to the test at the renowned Bocuse Culinary Institute. 109 people came to the school’s cafeteria for an ‘all you can eat’ 3-course lunch, costing €15 (£13, $17). The participants were divided in three groups: a control group with a regular menu simply listing the dishes available, a second group which got a menu showing the nutritional information (calories, fat etc) for each dish, and a third group, whose menu “described very beautifully all the sensory aspects of eating the food, the tastes, the aromas, the textures, etc.”

The first group consumed, on average, about 1,000 kcal (half the recommended daily consumption for women, 40% of that for men). The second group were apparently scared off by the nutritional data on their menu, as they only ate 681 kcal worth. The third group consumed just over 800 kcal – still 19% less than the control group, and a more sustainable amount. Asked about the perceived value of the meal, the diners in the control group thought they’d got €17 worth of food (a 13% surplus compared to the price paid), while those with the detailed nutrition information menu didn’t think the meal was worth more than the €15 they paid. But the guests in the third group, who had been primed for sensory delight, felt they had received a meal worth €20 – a surplus of 33% over the price paid. Cornil and Chandon’s intervention – which they call Epicurean nudging, after the ancient Greek philosopher who believed pleasure was the greatest good – seems to have worked as expected.

It is hardly surprising that it is two French academics championing the quality of food over the quantity. But their observations and conclusions may find application well beyond gastronomy.

As worries grow about the undeniable scarcity of the resources on our little planet (from water to energy), and about the amount of waste we produce (from plastics to carbon emissions), maybe epicurean nudging can be part of a bigger solution. If we are quite happy to eat less, enjoy it more, pay extra for the overall experience, and we can easily be nudged to do so, win-win-wins of this type might be feasible elsewhere too.

United nudgers of the world – this looks like a challenge!

Wisdom or koenfusion? Maybe the difference is not that big.
View all posts by koenfucius →
This entry was posted in Behavioural economics, Cognitive biases and fallacies, Health, Psychology, Society and tagged Nudging. Bookmark the permalink.