The battle between pluralism and purity

Purity and perfection are alluring, but when they come into conflict with the messiness of pluralism, compromising becomes difficult and we may end up with unintended consequences

People are choosing machines. All day long, we make choices. We choose when to get up, what to wear, what to have for breakfast, how to travel to work, where to do our shopping, and what TV programmes to watch in the evening. Some choices are not so frequent, but they are momentous: we choose where to live, what to do for a living, and who to work for. That is a lot of choosing. How do we manage it all?

Do we somehow rate the various options before us on a scale, and pick the one that scores the highest? That would be not be hard to do, if we only had to rate one characteristic that was easy to quantify. But in practice, we often have to choose between options that have many and diverse features. Take, for example, the simple purchase of a packet of biscuits. Milk chocolate or plain? Or no chocolate at all? What about the fat and sugar content? What brand? How much?

If we want to evaluate options like these on a single scale, we would need a clear equivalence between the different features. How much more would we be willing to pay for a posh brand? Would a biscuit with a chocolate filling be preferable over one with nuts? It would drive us insane. Instead we satisfice – we’re not looking for an optimum, but we pick something that is good enough. We let ourselves be guided by the one or two of the features of the biscuits that are truly important to us, and we don’t mind that they don’t score so high on the other ones. We are willing to compromise, provided the most important expectations are met. 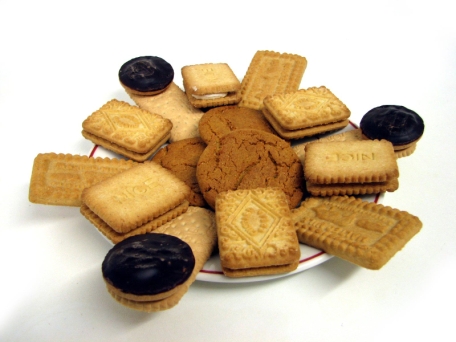 Coexisting side by side – a pluralist plate of biscuits (image: Caro Wallis CC BY)

That works well, and we often adopt a similar approach where it concerns whom we do business with. The supermarket where we shop, the person who cuts our hair, or the plumber who fixes our taps – they’re not remotely scoring a perfect 10/10 on everything. They may not even be among the best on many of the characteristics. But if they’re good enough overall, and meet the important requirements, we are tolerant of their relative weaknesses.

And it’s the same for the town and the street where we live, what our home is like, where we work and so on.

Even among our friends (whom we choose) and our relatives or our colleagues (whom we don’t) we tend to apply the same kind of thinking. Complete paragons of virtue are rare, and most of the people we know have at least some flaws in our eyes. In strangers, these would put us off, but here, given the value we perceive in the relationship, we are happy to overlook them.

In short, we generally don’t expect perfection or purity. We are quite capable of accepting that our friends do not necessarily completely share our tastes in food, sports or music, or that our colleagues may have different political views from our own. That attitude is essential when – as we do – we live in a pluralist environment, with numerous different combinations of tastes, preferences and opinions.

Talking about politics: political parties are perhaps among the most striking examples of pluralism in action. Large parties, with comprehensive manifestos, have no hope in hell to satisfy every member, let alone every voter in 100% of what they propose. The broad principles on which a party is founded usually leave a lot of room for interpretation, and that allows them to accommodate a great deal of diversity. And even if there are some issues with which one unequivocally disagrees: in politics one has to compromise, and that is what a party’s MPs, members and voters do.

Anyone who has recently been observing the two largest political parties in the UK may well wonder. They both seem to have let go of the idea of being pluralist.

Momentum, a movement of Labour party members that is strongly supportive of Jeremy Corbyn, has been accused of plotting to get rid of moderate MPs who don’t share their more radical politics almost since they Mr Corbyn became the leader in 2015. The latest and most audacious attempt at purging those who are considered ‘disloyal’ happened during the September 2019 Labour party conference. Deputy leader Tom Watson often openly disagrees with Jeremy Corbyn, and his disobedience has long been a thorn in Momentum’s side. When their leader Jon Lansman found it impossible to get Mr Watson fired, he tried to get the post itself abolished to remove him.

Pluralism, but not as we know it (image via YouTube)

And that is small beer compared to what Conservative prime minister Boris Johnson achieved. He effectively sacked 21 Tory MPs from the party for supporting the Benn Act, a law designed to prevent the UK leaving the EU without an agreement unless parliament approves. One of those expelled, Nick Boles, tweeted “The hard right has taken over the Conservative Party. Thatcherites, libertarians and No Deal Brexiters control it top to bottom. Liberal One Nation Conservatives have been ruthlessly culled. Only a few neutered captives are being kept on as window dressing.”

Both parties appear to have swapped the pluralism of old for partisanship and ideological purity. Such purity comes naturally to single-issue parties, which do not need to compromise. If only one thing matters, it’s easy to check whether someone is “one of us” or not. But it’s hard to see how this can end well for mainstream parties, who traditionally rely on a broad base.

We are all pluralists

For at the end of the day, we are all pluralists in ourselves. The 19th century American poet Walt Whitman wrote, “I contain multitudes”, and so do we all. Imagine we demanded the kind of purity these two political parties are pursuing in where we live, what we buy, who we buy from, who we work for, and from our family, friends and colleagues. Imagine we rejected any town or home, any product, any service provider, any employer that didn’t match our purity standards. Imagine we could only work with, or be friends with people who fully fitted our desired purity profile. We would soon die of starvation, cold and naked, no roof over our head, and desperately lonely.

As we go about our lives and make one choice after the other- in politics and outside – perhaps the most important choice is whether we will follow a purist path, or a pluralist path. If we choose the latter, we know we will need to compromise much of the time. We will need to tolerate imperfection and messiness. We will also have to accept that our own certainties will be challenged by those of others – but that is fine. Because we have nature on our side: pluralism, in the shape of diversity, is deeply embedded in nature: it is an essential condition for evolution, and enables species to adapt to changing circumstances. Likewise, it gives us resilience we need in a world that is never pure and constantly changing.

If we choose the former path, we won’t need to make any messy compromises, and life would look really simple and neat. But we would of course have to cultivate the most profound intolerance of what deviates from the purity of our tribe. And we will have to expect the same intolerance from other tribes towards us, naturally. We will become ever more defensive and inward looking. And soon we will see small impurities appear in our close allies. Having lost the capacity to tolerate these, we will before long have to turn our backs on them too…

The purist path or the pluralist path? It’s our choice. The battle between pluralism and purity is not fought in parliament or at the ballot box. It is fought right within us.

Wisdom or koenfusion? Maybe the difference is not that big.
View all posts by koenfucius →
This entry was posted in Behavioural economics, Emotions, politics, Psychology, Society and tagged choices, Pluralism, Purity. Bookmark the permalink.