Coase on the coast

Should we negotiate more with our fellow humans for a better life?

A couple of weeks ago, I spent a few days on the English south coast, in unexpectedly clement weather. While we had brought weatherproofs and an umbrella, we ended up having to go and buy sunscreen to avoid incinerating our skin as we sat on the seafront, eating our crab sandwiches.

Several other people were sitting alongside us on a row of benches, each enjoying in their own way the warm sunshine and the gentle bubbling of the surf. To our far left was a middle-aged lady, engrossed in a rather fat book, to our right a retired couple drinking tea from a thermos. Then two women appeared – mother and daughter, it seemed, to occupy the bench between us and the woman with the book. The former was sharing an ice cream cone with her dog, the latter was talking rather loudly on her mobile phone.

After maybe ten minutes, all of a sudden, the book lady got up, trotted over to the two women next to us and complained in an agitated tone about how the phone conversation made it impossible to concentrate, gesticulating with her free hand. Then she shoved her book in her bag and stormed off.

What we had been witnessing was the manifestation of what economists call a negative externality. That is a cost incurred by someone who was not involved in the action or transaction that imposed it. (There are also positive externalities, when a third party enjoys a benefit resulting from an action or transaction without taking part in it.) Often it is society as a whole that gets lumbered with negative externalities. A factory which, in the process of producing widgets to sell, pollutes its surroundings, imposes a cost on the people living in its vicinity: maybe people contract illnesses as a result, or if not that, there is a constant smell, or the deposits from the chimneys make the land of their vegetable patches infertile.

But externalities happen all around us, not just in the real economy, but in households (leaving the lights on, or the dirty socks on the floor), workplaces (interminable procedures for travel approval) and indeed the Dorset seafront.

In 1960, Ronald Coase wrote a classic (and very readable) paper on the problem of externalities, The Problem of Social Cost. (It would contribute to his being awarded the Economics Nobel prize in 1991.)  Being an economist, Coase was concerned with the efficient use of scarce resources, and he approached the problem of externalities as one of bargaining between the participants. Provided transaction costs were sufficiently low, negotiation between the different parties would – as elsewhere in markets – lead to an efficient solution.

That may sound bizarre, but it does happen in practice. An boss ordering pizza for her team working late is actually compensating them for a negative externality – getting home late. The negotiation may be implicit here, but it can be pretty unequivocally present as well. To a kid who would rather go to a friend’s birthday party, being taken by their parents on a boring visit to great-aunt Sal is very much a negative externality. And the discussion leading to parental concessions to ensure junior behaves on the trip is very much a negotiation. Some might be inclined to talk about bribing and blackmail, but of course the embarrassment of misbehaving offspring is a massive negative externality for parents, well worth some insurance premium.

Still, we don’t often go about negotiating with strangers about the externalities they (or we) cause. One explanation Coase offers is that the transaction cost is often a barrier. Operations like discovering who to deal with, informing them one wishes to deal and on what terms, conducting negotiations leading up to a bargain, drawing up the contract etc, Coase says, “are often extremely costly, sufficiently costly at any rate to prevent many transactions that would be carried out in a world in which the pricing system worked without cost.”

But it’s not as if there is no ‘cost’ involved when we don’t negotiate. The lady with the book suffered an emotional cost. She went over to the lady babbling on her phone to tell her exactly what she thought of the breach of peace – while she could have opened a negotiation.

Maybe it’s the idea of turning what we see as social interaction into a market transaction that repulses us? In a 2014 Slate article, Christopher Buccafusco and Christopher Jon Sprigman, two US law professors, described their investigation into the problem airline passengers fighting over the use of reclining seats. When the person in front puts their seat back, that takes away valuable knee space for the person behind them. The authors looked at whether passengers could be encouraged to negotiate.

Their surprising finding was that people were more inclined to trade the space if what was being exchanged was not money, but small gifts of equivalent value. This violates standard economic theory, which holds that getting a gift should never be better than getting the gift’s value. But it is consistent with human nature: when we’re invited to a dinner party, we take wine or flowers, rather than transferring the equivalent amount to the host’s bank account.

Nonetheless, getting people to negotiate about seafront peace and quiet seems even harder than getting them to do so on aeroplanes.

The Coase in the machine

But on the way home, driving along a 2-lane dual carriage way, continually being held up trucks driving at 59mph overtaking  one driving at 58mph, made me think. Could we delegate the negotiations we humans seem to find costly or embarrassing to technology? 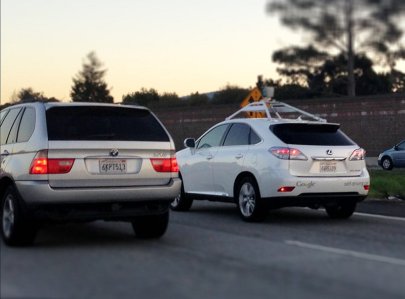 Just imagine a lorry that can communicate with the cars behind it, allowing the driver to offer a certain amount of money to hold them up while it overtakes a slow vehicle in front. Upon successful negotiation, the money is transferred and the driver will be able to pull out and start the manoeuvre. If the drivers behind are unhappy with the offer, the truck will stay in the inside lane and allow them to pass – and the negotiation can start with the next bunch of cars. (Alternatively, the car drivers could pay the lorry driver to stay in his lane of course.)

Obviously, in a few years’ time we’ll all be riding in autonomous vehicles, and we won’t even be involved in such negotiations. But how will our cars decide for us? Much thought has been going into figuring out how self-driving cars should react in case of an unfolding accident. Should they safeguard the occupants, or other road users – elderly people, children, bank robbers. A team at MIT developed a cool simulation to see how people think machines should make decisions involving such moral dilemmas.

But perhaps the trolley problem is not the only decision-making challenge for autonomous vehicles. Maybe we need to provide them with the means to negotiate with other vehicles depending on whether we’re in a hurry or on a leisurely trip.

And so the insights of the great Ronald Coase’s might continue to serve us well into the 21st century, even as we delegate more and more decisions to machines.

Wisdom or koenfusion? Maybe the difference is not that big.
View all posts by koenfucius →
This entry was posted in Behavioural economics, Economics and tagged Coase, externalities, negotiations. Bookmark the permalink.